Lizette Chirrime was born in 1973 in Maputo, Mozambique, where she grew up and attended commercial school until the age of seventeen. Creating artworks using paint and sewing has always been an important pastime for her and she never received a formal arts education. In 2004 she was invited to participate in her first solo exhibition in Mozambique and in 2005 she accepted a three-month residency at Greatmore Studios in Cape Town, South Africa. Chirrime now lives and works in Cape Town. She creates large-scale textile-driven works on canvas. It consists of abstract forms rendered in a collage of printed fabrics from Tshwe-tshwe to other so-called African prints associated with dress on the continent. “These abstract forms evoke the human body and my identity-responsive practice where I refashion my self-image and transcend a painful upbringing that left me shattered and broken. I literally ‘re-stitched’ myself together. These liberated ‘souls’ are depicted ‘dancing’ on the canvas, bringing to mind, well-dressed African women celebrating” says Chirrime. The interplay between textiles, abstraction and art as a therapeutic and spiritual tool all make Chirrime’s art unique and distinctively African. “I grew up under very harsh conditions, angry and afraid of life and with no self-esteem. I was a wounded person. I started gardening and drawing and this became my therapy. As a young adult I found myself on an island off the coast of Nyambane in Mozambique where I lived on my own for months. Here I started facing nature and understanding that I am part of nature and that I could conquer my fears feeding off the strength of this very nature that I am part of. I kept myself busy during the days creating artworks out of found materials. This is where the healing process started. I eventually returned to Maputo and started making and selling unique clothing items. These became sought-after and I was invited to participate in group exhibitions and related events. My work is guided and influenced by water, the female and a combination of happiness and sadness,” she says. 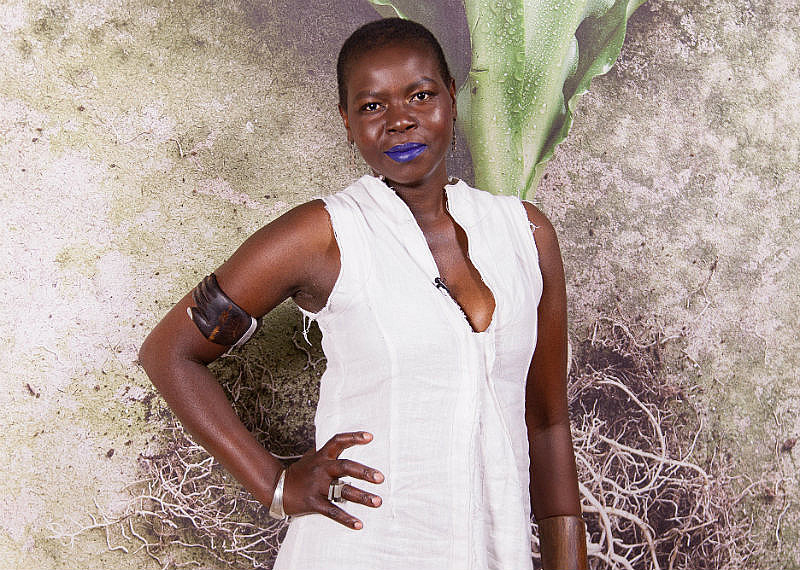 The fluid dance, dressed in red