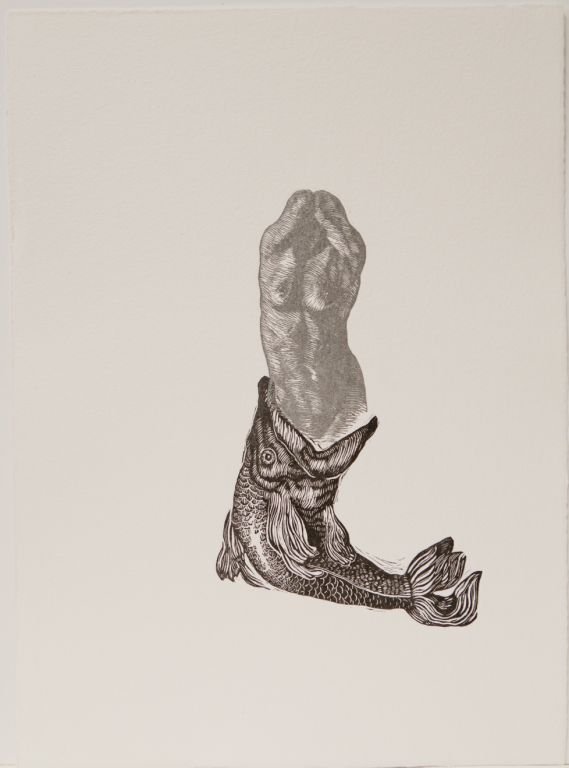 This small series of engraved linocuts is based on the poems of the Roman Poet, Ovid who describes a number of metamorphoses of mortals. Arachne is the woman who was acclaimed for her weaving skills and mistakenly challenged Athena to a weaving contest. When it became obvious that Arachne was better than Athena, the goddess became enraged and turned her into a spider condemning her to spin for eternity. Daphne was the mortal who caught the attention of Apollo and in an attempt to flee his unwelcome advances, she implored her father, Peneus to come to her aid. He turned her into a laurel tree to save her and Apollo created a wreath from the leaves to have a momento from the woman with whom he had fallen in love. Galatea was created by the sculptor, Pygmalion who fell in love with the marble statue had created. The gods took pity on him and brought her to life to be his wife. Proteus is the magical creature capable of morphing into different creatures at will. And the ship/siren is a combination of the harpies whose melodious singing lured sailors to endanger and wreck their ships on the rocks. Venus turning into a fish is the story of Venus escaping from Typhon by turning herself and her son Cupid into fish and diving into the sea. To prevent themselves from becoming separated, she tied a rope to bind herself to Cupid and this became the Constellation of Pisces in the night sky. I have used the template of a female torso to be the piece of puzzle in these composite works, adjusting each image with the addition of a linocut piece to create the metamorphosis.

Queen of the Night IV